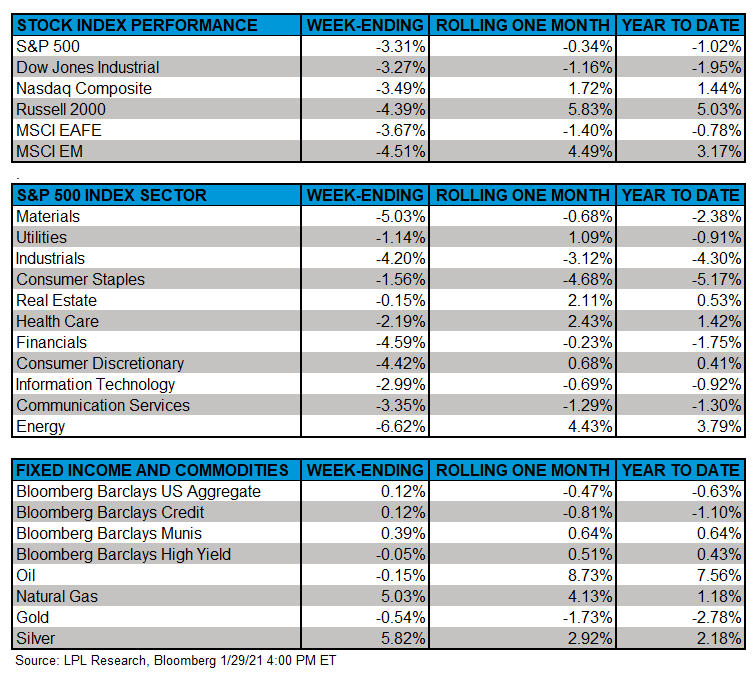 US and International Equities

The major market indexes finished the week lower with all averages down over 2%. Small caps, which have been a bright spot in recent months, also pulled back 2%. In addition, both the MSCI EAFE and Emerging Markets (EM) international markets followed the US markets lower this week.

All major market sectors sold off this week with the materials and energy sectors lagging all, pulling back over 4%. Nevertheless, energy is still the top performing sector year-to-date with a 6% gain.

The only sector bright spot this week was real estate, which lost a fraction. This sector was one of the major laggards last year along with utilities.

Shorts and Longs Stand Off This Week

The surge in GameStop and other highly shorted stocks has taken the country’s imagination by storm. These parabolic moves probably don’t reflect an overall unhealthy market, in our view, but institutions covering shorts at sizable losses may be removing capital from some big cap names. For more on this, please read the LPL Research blog titled Will GameStop Stop The Bull Market?.

We are in the midst of earnings season and as of right now, S&P 500 earnings growth for the fourth quarter is tracking to a less than 3% decline, which is about 9% ahead of what analysts had expected when the quarter ended per FactSet. Just as impressive, estimates for S&P 500 earnings in 2021 have increased by nearly 3 percentage points during earnings season.

Large one-year declines in the 10-year Treasury yield historically signal rising rates over the next year, and the pattern has been holding true. As of January 22, the 10-year Treasury yield was up 0.4% since the end of March 2020. Moreover, it has been advancing less than 0.1% per month since the beginning of August 2020. If rates continued to ascend, we would close further on the long-term average increase, although moves over such a short time frame are hard to predict. For more on the 10-year Treasury and our thoughts on it, please read the LPL Research blog titled Interest Rate Reversals Revisited.

Commodities were mostly higher this week. Oil’s rally from the fourth quarter last year has continued during 2021, though WTI crude prices were relatively calm this week. In addition, natural gas had a strong week, increasing over 4%. Gold and silver reversed its two-week pullback to finish this week higher, with silver rebounding over 5%.

US gross domestic product (GDP) grew 4% quarter over quarter on an annualized basis in the fourth quarter according to the Bureau of Economic Analysis. However this was below the Bloomberg consensus forecasts of slightly over 4%. Government and consumer spending were notable drags on growth in the fourth quarter, though the strength in the third quarter left a high-water mark for growth for many components.

The FOMC, the Federal Reserve’s (Fed) policy arm, decided to keep interest rates at near zero in its first meeting of the New Year. The Fed noted that the pace of economic activity as well as the employment landscape has moderated in the last few months. In addition, the major economic weak spots appear in the sectors most adversely influenced by COVID-19 like brick-and-mortar retail and restaurants.

The Fed continues to purchase at least $120 billion in Treasuries along with mortgage-backed securities monthly, a pace that the FOMC will maintain until economic progress is made. Moreover, the Fed will be closely watching how the vaccination program is advancing with regards to judging the economy’s trajectory.

The United States reported over 840,000 claims for unemployment insurance last week according to the US Department of Labor, below the Bloomberg consensus forecast for 875,000. In addition, continuing claims for unemployment also declined, falling to under 4.8 million versus Bloomberg forecasts of over 5 million. Even though jobless claims are still high, it appears the labor market is beginning to reverse the increase in claims seen toward the end of last year and early 2021.

Next week, the following economic data is slated to be released:

References to markets, asset classes, and sectors are generally regarding the corresponding market index. Indexes are unmanaged statistical composites and cannot be invested into directly. Index performance is not indicative of the performance of any investment and do not reflect fees, expenses, or sales charges. All performance referenced is historical and is no guarantee of future results. All market and index data comes from FactSet and MarketWatch.

For a list of descriptions of the indexes referenced in this publication, please visit our website at lplresearch.com/definitions.

This Research material was prepared by LPL Financial LLC.