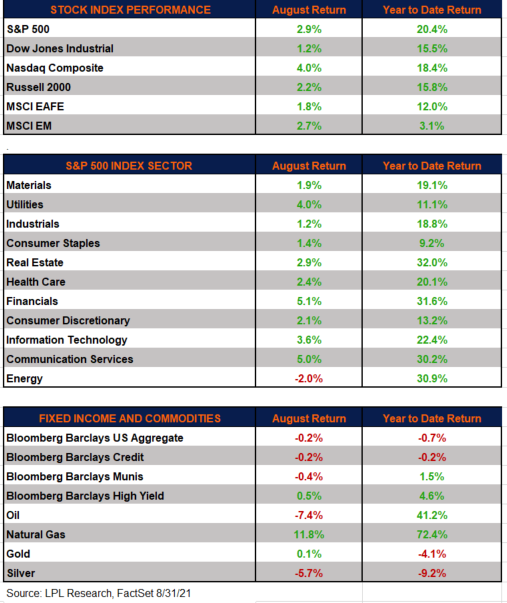 All of the U.S. major market indexes finished August higher despite concerns about the COVID-19 Delta variant, with the S&P 500 Index making it seven straight months of gains. The small cap Russell 2000, which struggled in July, rebounded nicely in August, leading all major market indexes. International equities, as represented by the developed international markets (MSCI EAFE), as well as the emerging markets (MSCI EM), finished the month higher amid uneven economic recoveries in Europe and Japan and concerns about the Chinese regulatory crackdown. Financials led all sectors in August on the back of strong earnings as well as support for lending margins from higher yields.

Even as COVID-19 and its variants have created economic challenges including disrupting global supply chains, the S&P 500 Index has managed to make over 50 new all-time highs in 2021. Moreover, the S&P 500 has reached a new high every single month this year and has gone nearly 200 days without a 5% pullback.

Current monetary policy can be seen as having a role in the market’s run, though strong corporate profits this year contributed their fair share. Earnings blew past estimates during the just-completed second quarter earnings season, with S&P 500 companies generating more than 20 percentage points of upside for the second straight quarter. Records for earnings and revenue beat rates, along with revenue upside, were broken this quarter, while third quarter guidance has been positive, suggesting that solid earnings momentum may continue.

“This has been an incredible bull run,” explained LPL Financial Chief Market Strategist Ryan Detrick. “Nothing seems to knock the bull off its pedestal.”

International bonds (FTSE World Government Bond Index) and emerging markets debt (JP Morgan Emerging Markets Bond Index (EMBI)) moved in opposite directions during the month. Emerging markets debt ended the month in the black as their yields declined amid concerns with the Asian economic recovery as well as the Chinese regulatory crackdown.

Both July and August have been quite volatile for both oil and natural gas. Natural gas had an excellent July as well as August, gaining over 7% and 10% respectively. Spot prices reflect an increase in natural gas demand due to warmer than normal weather across the country. Oil has lost some momentum since July and gave back over 7% in August. The energy sector finished the month lower for the second consecutive month. These stocks appear to be pricing in a ceiling for West Texas Intermediate (WTI) crude, potentially on concerns about increasing supplies globally.

Inflation: Consumer prices increased for the fifth straight month in July. The headline Consumer Price Index (CPI) increased 0.5% on a month-over-month basis, matching economists’ expectations, while prices increased more than 5% on a year-over-year basis. As discussed in previous monthly insights, one major reason for the increase was the continued base-effects due to the depressed economic conditions last year from COVID-19. Removing volatile food and energy prices, the July Core Consumer Price Index increased by 0.3% on a month-over-month basis, which was below economists’ expectations.

The Producer Price Index (PPI) increased almost 8% year-over-year in July. According to the Labor Department, this was the fastest annual pace since the federal government began calculating year-over-year PPI changes in November 2010. Producer prices excluding food, energy, and trade services increased over 6% on an unadjusted basis over the past year, the highest level since the reporting incepted in August 2014. Although inflation levels were elevated in July, we believe these inflationary pressures will mostly prove transitory.

U.S. consumer U.S. consumer: The Conference Board’s Consumer Confidence Index increased in July to its highest reading in 17 months, but is still just off pre-pandemic highs. The increase in the Present Situations Index drove the increase in July, while the expectations component remained flat. The University of Michigan consumer sentiment survey told a different story, falling sharply from July to August due in large part to the rising cases of the Delta variant.

U.S. home sales: Home sales increased in July, but rose only marginally from last year. Rising home prices and low inventories are driving potential buyers out of the market, as the inventory of homes declined over 10% from last July. With regard to new home construction, even though lumber prices have declined from May’s record highs, they still remain above pre-pandemic highs and supply constraints still exist with some building materials. Thus, builders have been challenged in taking advantage of increased demand. The median new house price increased almost 20% from last year to an all-time high of over $390,500 in July.

Federal Reserve (Fed) news: July’s Federal Market Open Committee (FOMC) meeting minutes showed that the Federal Reserve may be nearing a formal announcement on tapering in the coming months. Most participants noted benefits in reducing the pace of bond purchases as well as progress toward inflation goals. However, many members of the FOMC noted that employment goals have not yet been met.

At its Jackson Hole symposium on August 27, the Fed acknowledged that the Committee’s inflation goals have largely been met and that there has been clear progress toward maximum employment but the unemployment rate “is still much too high”. Powell also reiterated that the start of the tapering process does not provide a signal regarding the timing of interest rate liftoff, meaning that interest rate hikes could potentially still be several years away.

U.S. employment: The U.S. unemployment rate has declined substantially from last year’s peak, but at under 6%, it is still well off full employment levels. Even as the economy reopens and demand for labor improves, labor market supply needs to improve in order for the economy to reach full employment.

The economic recovery has continued at a steady pace even as the battle against COVID-19 and its variants continues. Strong earnings have been an important driver of this year’s strong stock market performance and second quarter earnings season was exemplary. The ability for companies to successfully absorb higher input costs and pass them onto their consumers will play an important role in future earnings results and thus the equity markets as supply chain challenges remain.

We believe that inflation is mostly transitory and will stabilize once the economy completes its reopening, when supply chains are fully operational, and labor shortages ease. Key questions that market participants want answered are how long the “transitory” period will last and what impact that may have on Fed policy, interest rates, economic growth, corporate profits, and stock valuations.

References to markets, asset classes, and sectors are generally regarding the corresponding market index. Indexes are unmanaged statistical composites and cannot be invested into directly. Index performance is not indicative of the performance of any investment and do not reflect fees, expenses, or sales charges. All performance referenced is historical and is no guarantee of future results. All market and index data comes from FactSet and MarketWatch.

For a list of descriptions of the indexes referenced in this publication, please visit our website at lplresearch.com/definitions.

This Research material was prepared by LPL Financial LLC.